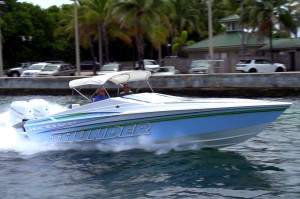 Poker Runs America just released a great feature on Active Thunder Boats, both focusing on the ‘highs’ of 2015 for the company, as well as a new business venture involving Mercury Marine! Check out an excerpt from the article, below.

Following an impressive year at Active Thunder boats with the launch of a new 29’ Savage, 29’ Defiant, as well as steady production of its 33 Evolution and 37 Excess, owner Patrick Haughey explained the company has a just completed model orders with Mercury Marine to be used as test boats at the company’s testing facility in Panama City, Florida.

According to Haughey, Active Thunder is currently completing a 37 Excess that will be rigged for outboards, as well as the company’s 22’ for Mercury Marine’s latest launch, the 6.2 L V8 300 hp.

“It’s great news when a company like Mercury Marine comes to you and says, ‘we like your boats, we like the way they ride and we know they won’t break,’” explained Haughey. “Basically, we were able to provide them with a boat that rides comfortably. They have guys on the water eight hours a day, running the boat and the engines hard. When they rode in the 37 they were very impressed with the ride. We also build a rock solid boat with out any issues.”

Haughey explained that Mercury Marine was interested in Active Thunder boats due to the use of utilizing full urethane composites in its hull construction, which completely eliminates the use of plywood or wood structures, providing an ideal platform that can withstand the elements and demanding running conditions.

“They don’t have to worry about the boat getting damaged or the boat breaking while they are running,” said Haughey.

This article originally posted on PokerRunsAmerica.com.