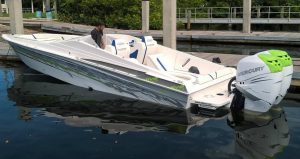 The six cylinder 350 and 400hp Verados are Mercury’s response to what it calls a “demand for higher horse power” and will compete directly against Yamaha’s V8 350hp outboards.

The 350, which weighs in at 303kg in the 25 inch shaft variant, revs out to 6400 rpm and is designed primarily for sportfishing boats in single, twin, triple and quad configurations. The American market is dominated by large centre console boats, many of which feature multiple engines on the transom.

As with all six cylinder Verados, the 350s come standard with integrated power steering, digital controls and what Mercury calls its “Advanced Mid-Section”, a mounting system designed to minimise noise and vibration.

This article was originally posted on Fishingworld.com.