Looking Back: Active Thunder Riding The Waves of Time

Active Thunder was featured in Powerboating in Paradise Volume 13!

Read more below about Active Thunder riding the waves of time!

Considering the roller coaster ride that most companies have endured in the performance marine industry over the last two decades, Active Thunder Powerboats of Pompano Beach, Florida has certainly ridden some big waves, both literally and figuratively. Moreover, company owner Patrick Haughty, has kept his performance company closely aligned with Florida Powerboat Club since 1993—the very same year that both companies were formed.

It was early fall 1993, when Sonic USA enlisted the support of Florida Powerboat Club to assist with the planning and logistics of a Sonic owners rally to Marathon, adding a day trip to Key West to watch the 1993 World Offshore Championships. Out of the twenty-two registered powerboat teams, I met a couple named Pat & Diane from Boca Raton, who attended in a 30 Sonic, named Ultra Sonic. By the second day, I found myself talking with the couple frequently, and it appeared that Pat was more than just a willing participant. He truly loved powerboats and made it clear that he had some big plans to get more involved with the industry.

Within months, Pat had acquired the molds of Chicago-based Thunder Powerboats, which amounted a 25 and a 32 v-bottom. He soon began construction of two new boats in a Pompano Beach warehouse adjacent to his successful and growing auto body shop, B&R Auto.

By early fall 1994, Pat had both boats complete and was looking for a good outlet to show them off. His timing couldn’t have been better. The factory-sponsored Sonic Rally was not going to proceed, so under the Florida Powerboat Club flag, the 2nd Annual Key West Offshore Rally was planned for early November The only problem was, FPC needed a pace boat and Pat was quick to offer a solution. I could take the brand new single-engine 25 Active Thunder, while he ran alongside in his new twin engine 32. We were locked and loaded. WE departed Hillsboro Inlet in Pompano Beach, first to Fort Lauderdale, then to Miami, picking up boats along the way. What was truly iconic was that our pace boat combo of 25 and 32 foot v-bottoms was leading an eclectic pack of very big powerboats. Included were two 42 Sonics, two 45 Sonics, a big power 40 fountain, a 38’ Cigarette Top Gun and even a performance catamaran. We were in the lead all the way from Miami to the Florida Keys. 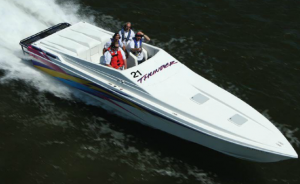 It wasn’t long, though. Before the over-zealous drivers passed our pace boats, and one by one —as they tried to navigate the upper Keys —all began to run around. Oh the stories that can be told from the early FPC archives. In the dark of night and unassisted by any GPS chart plotters, the little 25-foot Active Thunder lead the pack into safe Harbor at Hawks Cay Resort in the middle keys. It’s a story, and an experience shared by Pat, myself and a handful of others that’s locked away in the archives of Florida Powerboat Club.

Over the next few years. there was plenty more to come from Active Thunder. Pat grew his staff of knowledgeable boat builders and expanded his shop facility by acquiring a building just a block away, where he could keep tabs on production and still remained focus on his successful automotive collision business. He brought in new talent, and recruited south Florida naval architect Harry Schoel, who had many years of experience in the design and construction of stepped-hull bottoms. The 25 vee became a 28-foot model, and eventually, the 32 got a big brother, the 37 AVS, which featured a radical mid-ship step and performed well with factory stock engines. Pat’s powerboating friends, many of them former Sonic owners, and folks he met through the poker runs, began to buy Active Thunders. The popularity of the 37 AVS grew rapidly. It had proven itself not only in Poker runs, but also on the offshore race circuit, where a handful of Active Thunders were pounding the rugged seas and bringing home trophies. But the waves of time fell hard on Active Thunder’s foreword motion. As Pat recruited more people to manage the production and sale of new boats, he seemed to lose touch with the day-to-day operations. Overhead and expenses skyrocket, and a sudden death of his production manager, cast a dark shadow over the small company’s future. As the economy took a sharp downturn in 2008 and 2009, Pat was determined that closing the doors would not be one of them. Instead, he made a decision with only on simple word — adapt.

Today, Pat runs his boat building operation the old fashion way, hands on. While the basic hull and deck of any new active Thunder is laid up with the very best production materials, every build is custom. Customers walk through every step of selection for their own personal boat. From the engine and drive, to the custom interiors designed by Pat’s wife Diane, and the colorful graphics designed by Chris Dilling of Graphic EFX, every boat is a signature of it’s owner, never are any two alike. While the total count of all Active Thunder’s produced in the more than twenty years of business amounts to approximately 300, it’s impossible to attend ANY poker run around the nation, and not see one, two or even a few models present. One thing is certain; every Active Thunder owner always has something good to say about his or her boat.