Check out Speed on the Water’s latest article on the Active Thunder 37 Excess! All photos courtesy Greg Harris.

There are tons of boaters out there who’ve had the rug pulled out from under them or legal issues that derailed a potential boat purchase. So, in the case of South Florida native and real estate broker Greg Harris, his decade-long boat-buying drama is far from unbelievable.

It’s still a story worth telling, but for now the well-known performance boat enthusiast and former offshore racer doesn’t want anyone feeling bad for him, he just wants everyone to know they can stop asking him when he’s going to buy a boat.

That’s right, Harris and his better half, Yvonne Aleman, are planning to run a spruced-up 2008 Active Thunder 37’ Excess with twin Mercury Racing 700SCi engines at the upcoming Pirates of Lanier Poker Run in Georgia in mid-July. 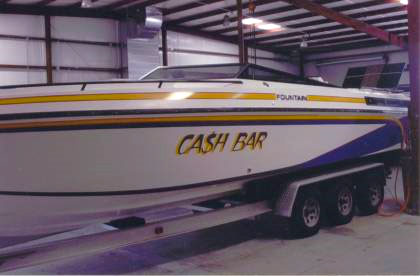 Still, Harris was hooked and ready to upgrade, so in November, he dropped the 29-footer back at the same dealer where he purchased it. He said it was to be used as a trade, with additional cash, toward a new boat to be built by a well-known manufacturer. Six months later he found out that the dealer had sold his boat along with a few others, and disappeared with his cash.

Harris, who caters to an ever-expanding group of performance boaters (many of whom he’s proud to call friends) looking to obtain waterfront real estate in an area he knows far better than most, said he didn’t grow up with much money so the idea of owning a go-fast boat was not too feasible.

“When I bought my first performance boat, it was already 14 years old and $30,000 was a lot of money for me,” Harris said. “I never dreamed I could afford more. As a blue-collar kid from a humble family, the plan became trade-up and pay-up to get the boat I always wanted.”

After dealing with legal issues for a year, Harris was ready to purchase a boat again in 2004. So rather than turn to a “smaller” dealer, Harris decided to go to the largest dealer in the U.S., National Marine. He purchased a Cigarette Racing 38’ Top Gun and was enjoying life on the water until four months later when he was notified that the boat had been someone else’s trade-in and that National Marine had not paid off the original loan owed to the bank by its previous owner.

Harris said he was legally obligated to return the boat to its original owner, who just so happened to be experiencing a similar dilemma with National Marine with a boat he recently purchased. The process of attempting to recover his money and absolve the debt was an “administrative and legal nightmare” that lasted until 2008 when his name was cleared of responsibility for the six-figure loan he received for the Top Gun.

“After those two bad deals, I was unsure I would ever be able to buy another fast boat,” Harris said. “It has been a long process and the endless explanations grew tiresome and painful. I am so happy to once again finally be able to join the community as a boat owner.”

Of course Harris, who started getting serious about buying a boat once the real estate business picked back up in 2012, is excited about the 37-footer, which was built for a very specific owner and was lovingly referred to as The Color Of Money. He added that the boat had fallen into some hard times and is in dire need of some TLC, which is why it is on its way to Brand X Hi-Performance Marine for engine removal and servicing before heading to Active Thunder for restoration to its original paint and interior condition.

In journalism we call this full disclosure: I admit since I joined speedonthewater.com in 2011 that Harris has become a friend as well as a source of information. He’s also someone who I, and many others, have harassed lightheartedly about his lack of boat ownership. For those who have been especially critical, you’ll be happy to know Harris can’t wait to show you his new ride, especially after he gets everything done on his checklist.

Harris said Pat Haughey of Active Thunder has responded with enthusiasm and unwavering support to help restore the boat to its original appearance and condition. Harris also will be working closely with Jason Ventura and the Brand X team to ensure that the boat runs and performs as well as it looks.

As expected, speedonthewater.com will profile Fast At Last as various projects are completed on the 37-footer from Active Thunder.

This article was originally posted on SpeedOnTheWater.com