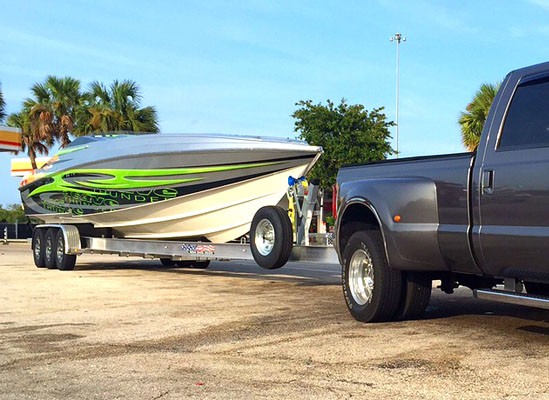 With his recently purchased 2008 Active Thunder 37’ Excess powered by twin Mercury Racing 700SCi engines in tow on its spanking new Bad 2D Bone Trailers, Greg Harris and I caught up yesterday as he was entering Georgia en route to his first poker run in the 37-footer he purchased a month ago.

“I’m definitely excited to finally be taking my own boat to a poker run, but I’m twice as excited that it’s on the lake I formerly called home and at an event as awesome and worthwhile as the Pirates of Lanier Charity Poker Run on Lake Lanier,” said Harris, a South Florida native and real estate broker who is hoping the Active Thunder reverses some unlucky past performance boat experiences. “I’m also happy people will be able to see the boat as it was purchased—cleaned up of course—and then be able to witness the progress as we make this boat our own.”

Harris and his girlfriend Yvonne Aleman can’t wait to join the masses—300-plus boats are expected to participate—at the seventh annual Pirates of Lanier Charity Poker Run, which raised more than $400,000 for local charities last year.

Harris said without the support of longtime friend Jason Ventura of Brand X Hi-Performance Marine the boat wouldn’t have been ready for Lanier. Especially because Ventura was the one who recommended Bad 2D Bone Trailers in Pompano Beach, Fla., for its efficiency, competency and quality. After towing the boat 700 miles, Harris was complementary of the triple-axle trailer saying that Willie Ventura (no relation to Jason) and the team at Bad 2D Bone Trailers did an excellent job with it and delivered it on time, as promised.

“Greg’s trailer took us a few days to assemble and it turned out great,” said Willie Ventura, who has been building custom trailers for boats, cars and motorcycles for more than 20 years. “It’s a solid all-aluminum trailer with stainless-steel hardware, nice aluminum mag wheels and green LEDs that light up the boat like a runway.”

Harris insisted on the bright green LED to complement the boat’s paint job, which he said needs to be fixed. But it’s boating season and Harris wasn’t about to miss out on another one, which is why he asked Jason Ventura to get everything up to snuff to be able to run in the Pirates of Lanier event.

“The fluids, hoses and belts have been changed and are all on my schedule now thanks to Jason and his guys,” Harris said. “They upgraded a few smaller items, too, and after Lanier it’s going back to Brand X for a few more changes, including some electronics updates, before we take it to the next run.”

At the same time, also per Jason Ventura’s recommendation, Harris turned to Doug Capello of High Class Marine Detailing to clean up the 37’ Excess, which was poorly cared for by its previous owner.

“Doug did an unbelievable job on the paint, especially because he had to work around Jason and the guys at Brand X,” Harris said. “He really brought out the shine—at the same time it accentuates the nicks and dings in the hull and paint, but there’s nothing we can do about that for now.”

The hull, paint, bilge, interior and more are all on Harris’ restoration to-do list, but for now it’s time to go boating. After Lanier, Harris and Aleman plan to run the boat in Destin, Fla., at the Emerald Coast Poker Run (Aug. 21-23) and then head to Missouri for the Lake of the Ozarks Shootout the following weekend.

Harris and Aleman were especially grateful that their friend put together a Fast As Last logo as a boat-warming gift. Brian Martin and his team at Trademark Graphics in El Dorado Hills, Calif., which specializes in graphic design and everything from signs, banners and promotional items to wraps for a variety of vehicles.

In need of insurance coverage for the 37-footer, Harris turned to another friend who he’s gotten to know well over the last few years while searching for a boat (and asking for insurance quotes)—Devin Wozencraft of Wozencraft Insurance.

This article was originally published on SpeedOnTheWater.com