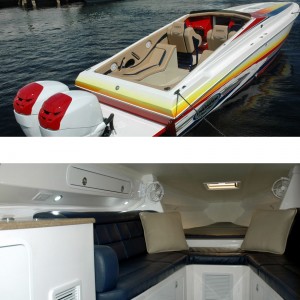 More than once, Active Thunder’s Patrick Haughey has stated publicly that he’ll never offer a center console model. Yet that doesn’t mean he’s opposed—in any way—to outboard engine power applications in the traditional closed-deck sportboat segment of the market, as he proved several months ago with his twin Mercury Marine 300 Verado outboard-powered 29 Savage. And now Haughey, who owns the Pompano Beach, Fla.-based performance boat company has gone even bigger with a 2016 33 Evolution model powered by a pair of 350-hp Verado outboards, mounted on 30-inch brackets from Stainless Marine, from Mercury Marine. Haughey took the boat on its first sea trial yesterday, and was delighted with the results.

“We finally had nice weather and other than a 20-mph south wind everything was perfect for a sea trial including the three- to five-footers that kicked up by the time we hit the water,” he said. “With the 350 Verados on their 30-inch brackets, the 33 Evolution is more than 35 feet of offshore beast.”

Before heading south toward Miami, Haughey made sure all the boat’s systems were operating properly for what he described as “a simple, new-boat shakedown” session Then he brought the boat to a “comfortable” cruising speed of 50 to 55 mph.

“We looped around and ran back inside where we had smooth water,” he said. “I was really impressed with how quickly this boat tipped over 70 mph. Being as we were in a 25-mph zone I pulled the throttles back to avoid the ‘blue lights’. The boat weighs in at 7,500 pounds dry, and we had three people aboard plus 75 gallons of fuel. So I was pleasantly surprised with the speed, despite no prop testing.

“Even considering a combined wind of more than 90 mph, the cockpit remained pleasantly calm,” he continued. “And with the Verados running as quietly as they do we could talk to each other at speed and still hear the stereo system. I was also happy with the design of a ‘lean seat’ incorporated in the rear lounge headrest allowing the rear passengers to tuck in behind the front bolsters when running at speeds.”

This article originally posted on SpeedontheWater.com.